When I took my first "break" from full-time science, in 2009, I might have expected to be getting a break from learning zoology. Sure, the break was to complete some science-writing projects while awaiting new grant funding, but the writing was dealing with topics I already knew relatively well: not breaking too much new ground. Or, at least, that was the plan...

What actually happened (and I am skipping a mass of details and sub-plots here), was that I got monumentally stuck on the intended projects, generally cast-aside by the research team and variously diverted into other activities. Anyway, it all turned out beautifully, but not as expected: not remotely. For a start off, a steady stream of magazine work fell into my lap (or, rather, my e mail in-box) as a consequence of a single piece I just sent off on spec. Meanwhile, everything about the well pre-planned book-work and its willing publisher sort of fell apart. To adapt the proverb, "Not all of those who wander are lost" (but they may well think they are at the time).

Anyway, the new path involved a regular column on reptiles, amphibians, arachnids and insects for a British high-street magazine and that, ultimately, led to other things. For quite a while, the column was just interviewing experts in the field, but in later years, there was quite a bit of so-called "creative non-fiction" and my usual shtick of mixed anecdotes and zoology loosely tied around a central theme. Now, whilst I am generally "ok on insects", reptiles and amphibians were a totally new field and an unexpectedly complex one. It is amongst these impressively varied little creatures that all sorts of zoological jiggery-pokery occurs. Temperature-dependent sex-development of offspring? Yes! Genetically-encoded gender-determination? Certainly! Detachable tails? Sometimes! Facultative hibernation? Absolutely! Parthenogenesis? Yep! Colour-changing abilities? Sure, why not?!...

That's a whole load of complex zoology there already and that is just scraping the surface. To begin with, I knew nothing and that had to change rather rapidly. As the old joke has it, the first rule of being a lion trainer is to know more than the lions. Likewise, if you want to write about herps, then, you must know more about what you are typing than your readers. Either that, or you must tell them what they already know with a great deal of panache, humour or poetry. Getting up to speed meant buying an idiot's guide and then some more specialist ones of increasing complexity. For the latter, "Herpetology: An Introductory Biology of Amphibians and Reptiles" by Laurie J. Vitt and Janalee P. Caldwell, is excellent. Then there were more specific scientific journal papers on topics of particular relevance. It was like being a student all over again- only of animals, this time, not microbes.

Along the way, I got to keep some interesting creatures, not least some Mediterranean Spur-Thighed Tortoises. Whilst my own were bought (complete with official breeding certificate) as hatchlings, for a while, I was co-custodian of an ancient and rather dignified "lady" called "Speedy" (below). Already aged in her 80s, Speedy had outlived her owner and been rescued in late Autumn from the garden by a kindly neighbour, just as she was trying to dig herself a burrow. Veterinary opinion was that, having never previously hibernated, she was unlikely to survive so doing entirely unprepared* in a Yorkshire garden. So we got a shelled lodger, until she was rehoused again a few months later, by a friend with more experience, better facilities and an entire herd of tortoises of her own.

So, this is Speedy- happily living it up, as only an elderly tortoise can, under the expert care of Susan and her personal tortoise menagerie- 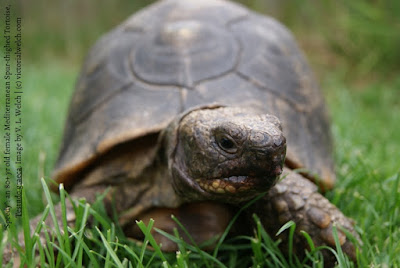 It is worth a quick note that tortoises are one of the few creatures I have ever encountered that get markedly more appealing as they age. The hatchlings and young ones are so much less interesting - it is as if it takes them a couple of decades to get off to a start, let alone develop a characterful personality. I am sure there is a joke in there somewhere, but cannot for the life of me think what it should be.

Ok. So that is image 1. Image 2 has much less of a personal connection: this is a Green Turtle a.k.a. Green Sea Turtle** photographed in Eilat, on the shores of the Red Sea. Now the Red Sea, as everyone knows, is a northerly projection of the Indian Ocean and Green Turtles are found in all 3 of the world's great oceans (Atlantic, Pacific and Indian). At one time, those in the Pacific were thought to be a different species (and later, different subspecies) from those swimming elsewhere, due to their darker carapace colour. This topic has been subsequently much debated, however, now all Green Turtles are generally considered to be the same species, albeit one with some variation across its range. What I did not know until recently was that the name "Green Turtle" comes from the "the greenish color of the turtles' fat, which is only found in a layer between their inner organs and their shell". Like so many other herps, the Green Turtle is endangered. It is nothing short of a major global disaster that so many herps are in serious danger of extinction- to lose such magnificent creatures would be a tragedy. For now, it remains an avoidable one, but their future depends on mankind making wise choices environmentally and otherwise. 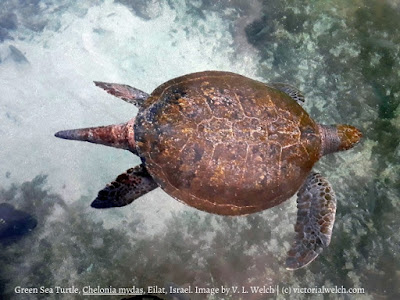 * (For non tortoise-owners): Tortoises do not always survive hibernation and can survive full lives without ever hibernating. So owners make an annual decision as to whether to prepare their pets for hibernation or, instead, to move them to a warmer environment, such as a heated indoor enclosure, during the colder months. Preparation involves reducing food supplied until the tortoise is fasting and preparing an enclosure that is well enough insulated, dry and constant in temperature to protect the sleeping animal from frostbite, amongst other things. Unprepared tortoises can die because if they do not have their food instake appropriately reduced, it ferments and festers in their intestines, due to reduced peristalsis rates while they are hibernating... and that can cause fatal infections. Tortoises that are too "light" for their size or have health issues can also die if allowed to hibernate. Hibernation in an environment where the temperature is allowed to fluctuate (i.e. not maintained at a constant appropriate temperature) carries the added risk that it might rise high enough to cause the tortoise to awaken before the end of the cold season. Waking up is a physiologically demanding process and burns a lot of the creature's resources. Therefore, a tortoise that has woken once during hibernation is considered unlikely to be able to return to hibernating that winter: amassing sufficient fat and internal resources to survive a single waking up is difficult enough. Returning from being prematurely awakened back to hibernate longer and then repeating the waking up process is likely to result in death.

** In the UK, a land-dwelling shelled reptile is called a tortoise and a river-or sea-dwelling one, is called a turtle. So, by definition, a creature called a "turtle" would be understood to live in water. As I understand things, in the USA, the word "turtle" is also used to describe both a land-dwelling shelled reptile (aka tortoise) and a river- or sea-dwelling one.
Labels: Books on Herpetology Books on Reptiles Eilat Green Sea-Turtle Green Turtle Mediterranean Spur-thighed Tortoise Photo archive Practical Reptile Keeping Red Sea Testudo graeca