Today’s post is mainly about books, creativity and burn-out.

I was recently introduced to the work of Brandon Sanderson or- more specifically- his novel “Skyward” , which is all shades of awesome and very highly recommended.

Anyway, I love finding a new artist/writer who is already part way through their career -because it is like finding a seam of coal/books/albums fresh to mine, one by one, instead of having to sit and wait for a year or two between instalments of their work. With Harry Potter, I came to the series about the time J.K.Rowling was writing book 3 or 4, so I had both the experience of finding a new “seam-of-creativity” and then the period of waiting to find out what was going to happen next, instalment by instalment (and the endless discussions with others about what we thought would happen). This whole discover-a-new-artist-and-their-creative-“seam” thing usually happens to me with musicians, rather than writers (Paul Simon was one, then Ed Sheeran and, more recently, Melissa Ferrick- all highly recommended, by the way) , but Brandon Sanderson is a real find. It almost takes me back to “discovering” Douglas Adams, Terry Pratchett and David Sedaris all over again. Not only that, but Sanderson is famously prolific, so the lull between books promises not to be too long*. 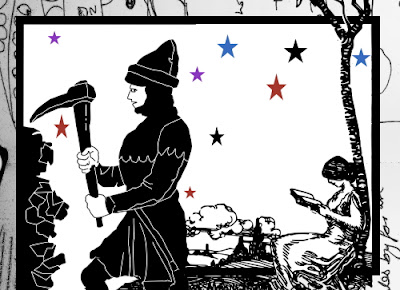 So, in the little time I have known of Mr Sanderson’s existence, I have learnt a few things about him. A list would not be particularly worthwhile, but most interesting I think is that he writes an annual “State of the Sanderson”/ “State of the Nation” post each year on his birthday, outlining his writing plans for the year ahead**. Now, most of the writers I know tell me that they are juggling multiple competing projects at any one time and that certainly applies to me. The last thing I would want to do in the run up to my birthday is draft and articulate a plan of exactly what I intend to do. I am not sure I could even do so if I tried- so much of this kind of work depends upon factors outside of the writer’s conscious control.

There is a general plan- yes- half a dozen projects that seem exciting. I currently seem to have 2 main books on the go most of the time, with a raft of smaller pieces that get fitted in around them. The smaller pieces are mostly magazine items, some blog posts and some technical paper editing. Yet sometimes a year goes by and one project makes no progress at all. Othertimes something is done and dusted in 31days flat. It is not all a matter of hours put in to a project, either- just sometimes things gel and sometimes they don’t.

The thing is, the more people I talk to in this line of work, the more I realise that is a pretty typical experience. Academic writing and academic writers are a bit different, it seems- perhaps a bit more structured. From experience, it probably helps that academics are encouraged to write in great detail on a fairly narrow array of subjects. They are encouraged to be “deep and narrow”, rather than “broad and wide”. Commercial writers, on the other hand, generally seem to have a lot of somewhat disparate stuff going on at any one time and editors, often even more so.

This mode of working can be a great relief, as well as and an economic necessity. For example, one of the two books I am working on delves both into a lot of technical material and into a lot of esoteric subjects. The source material ranges from terse and seemingly reliable military accounts to badly translated and rambling testimony from the strangest, most motley array of witnesses you could ask for. A little while back, I got to the point where it was just making my head hurt and I had to take a break. So I did.

Ultimately, while “book 1” has been on hiatus, I have written the better part of 2 popular science magazines, single handed, commissioned and edited almost all of the remaining content for them, done a sheaf of anonymous editing (ghost editing) of technical articles, written the posts on here and done about 35 to 40% of another book I started years earlier. None of that was really planned. Or, at least, the sequence of events was not.

In a lot of ways, this break has been really quite productive. “Book 2” is currently in full flow, so that will end up being completed before “Book 1”. That altered sequence is fine, even if it is not how any of this was planned. The point being that experiences and work patterns like that seem to be fairly typical for most writers. So I would venture that someone who is able to plan as well as Mr Sanderson is not “your typical writer” in his methods; kudos to him. Whatever he does, if “Skyward” is typical, he does it very well.

That’s all from me for today. Thanks for reading and see you next time.
Victoria

* Although Douglas Adams is one of my all-time favourite writers, he was well known for be unprolific and perennially beset with writer’s block. If accounts by those who knew him are accurate, he used to take lengthy baths, send product-improvement suggestions to Apple Computers and have long gossiping sessions with friends to fill in the long periods between bouts of productive writing. I get the firm impression that he would have been a great fun friend, but, sadly, none of that helped to expand the Hitchhiker or Dirk Gently series at anything beyond a snail’s pace.

** Thanks to Nurit for supplying that information and introducing me to all of that jazz…
Labels: Brandon Sanderson coal-seam of creativity David Sedaris Douglas Adams Ed Sheeran J.K. Rowling juggling many balls Melissa Ferrick Paul Simon Terry Pratchett Writing method