Between about 2009 and 2012, I took around 70,000 photographs of animals and plants. Some of these ultimately found their way into art exhibitions, or books (by me or others) and a fair few more were used to accompany various magazine articles. That said, a much greater number of them haven't (yet) gone anywhere and, if I am totally honest, a great many of them never will. Sometimes this is a technical issue- some shots are just better than others- sometimes it is about bracketing, but at other times, the issue is just not having the time and context to place them. It is a lot easier to place images that are closely related to my main writing "beats" than those on other topics. In any case, I do a lot more writing than photographing now and the time available to take and publish pictures reflects this shift.

Still, it seems a bit of a shame to have all these pixels hiding away on a hard drive that never see the light of day, so I plan on posting a picture every week from "the archives" with whatever notes accompany them. Some of these pictures are more recent than 2012.  They are mostly wildlife and almost all shot with a Sony 12Mega-pixel crossover camera, which was a whole lot more state-of-the-art when I bought it than it is now...

First up are a few shots taken in Singapore Botanic Gardens. More specifically, these are from and around the gingers garden in Singapore Botanic Gardens, which is part of the open access, free part of the gardens- as opposed to the orchid gardens, which are truly amazing (more on them, another day), but have paid entry and more restricted opening times.

The ginger family, Zingiberaceae, is well known for having an abundance of beautiful flowering plants amongst its 1600-odd known species, so the ginger garden is an obvious first port-of-call for a photographer in any botanical gardens. Those of Singapore are no exception. After all, this is the family in which one finds plants like  summer tulips and ginger lilies (Hedychium species, whose name derives, rather poetically, from the Greek words for "sweet" and "snow"), as well as a various spice plants, like galangal, turmeric, cardamon.

Members of the ginger family are found throughout the tropics of Africa, Asia, and the Americas, with a particular abundance in Southern Asia*. So, when I braved the relentless heat and humidity that characterises Singapore to see the ginger portion of the botanic gardens, I expected something impressive; as you can see, I was not disappointed.

That said, though, some of the highlights of the visit (for nature-spotting, if not for photography) were the unexpected insects- the dragonflies and butterflies- that have made their home amongst the plants that people actually come to see. Things like chocolate pansies (Junonia hedonia) and Great Eggflies (Hypolimnas bolina) and the like. The latter has an annoying tendancy to keep its wings closed (see below), such that its glorious upper wing surfaces are decidedly harder to photograph than those of the pansies, who will happily flash anyone (insert joke here).


Anyway, I happily spent the better part of an hour, lying flat out on the ground, chest down in the mud and puddles snapping away at the insects, which is a sure sign of a productive and successful photography session. Afterall, the discomfort is temporary, but the images are not.

Several of the resulting butterfly images are now under embargo for a magazine article on butterflies, but the dragonfly pictures are not. Here are a couple of snaps... 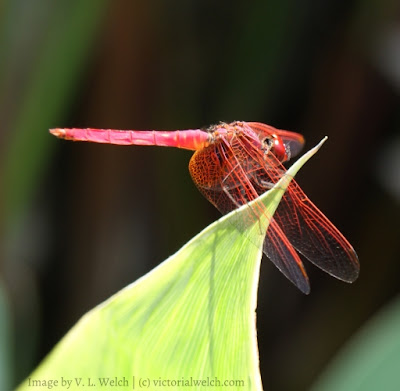 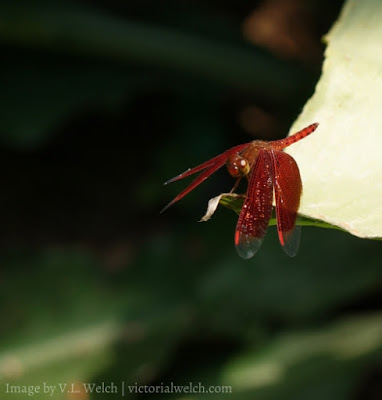 ...and if you have not yet been lucky enough to see Singapore Botanic Gardens, I whole-heartedly recommend it.

Thanks for reading,
Best Wishes,
Victoria.

[Next images in this series will be posted this time next week].

*Ginger iteself is considered to have originated amongst the lowland tropical forests of the Indian subcontinent and southern Asia.