Today's images are of butterflies, taken, once again, in Singapore.
Actually I got a lot of lovely wildlife pictures there- partly on account of it being a Mega-diverse region (and partly on account of the great public transport and health and safety stadards making it easy to get close to the aforementioned mega biodiversity without contracting malaria/being beheaded or getting lost in the process...)

These are both pictures of the Clipper Butterfly, Parthenos sylvia, which is a fast-flying, fairly large nymphalid butterfly, with the endearing trait of "posing" with its wings open, while you photograph it- always a plus point in my book. More accurately, I should just say that it frequently sits with wings open, showing the upper surfaces and it is not unduly jittery, like some butterflies are, so it is easier to picture than some.

The first picture shows an individual with a left hindwing that did not develop or unfurl properly when it emerged from its pupa. In terms of flight, this is unlikely to be a major problem. A few years back, I had a long conversation with one of the world's foremost insect flight experts, who told me that essentially butterfly wings are vast compared with the mass of the butterfly and produce far more lift than is strictly necessary. He explained that one consequence of this surfeit of lift is that they can adopt an unpredictable, inefficient, fluttering-type flight when needed, which makes their movement somewhat chaotic for a predator chasing them and thereby enhances their survival chances. For this reason, a butterfly with a deformity like this one would probably be impaired in terms of its flight capabilities, but it is still able to fly: it still "functions" as a butterfly. 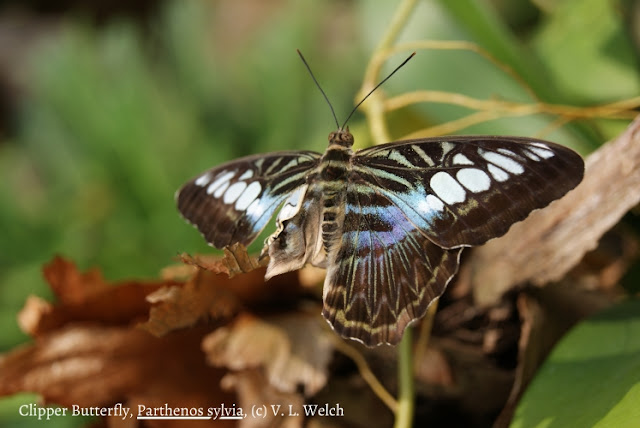 The second picture is of a "perfectly formed" Clipper Butterfly, again a blue colour morph Clipper- 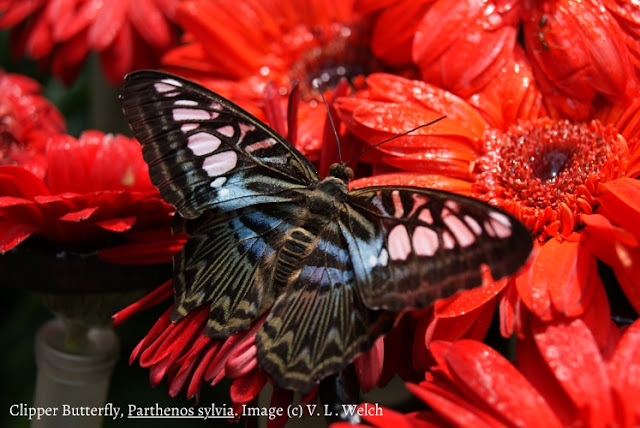 (although, admittedly this one has a little damage to the left hindwing and right forewing margins as a consequence of damage acquired in adult life). In other words, this is a butterfly that has "lived". [If this conjours up pictures of the-Keith-Richards-of-butterflies, complete with bandana around its antennae and spliff-in-its proboscis, I apologise].

Now, if I had to put one of these pictures up for a photographic competition, the second picture is clearly better. Even ignoring the superior background, the butterfly would be considered a "better specimen" and therefore a better photographic subject. However, I personally prefer the first picture and the reason is quite simple: of all the clipper butterflies in the world, how many look like the one in the upper image? Probably not very many. The top butterfly is imperfect, it is "deformed", but yet it remains beautiful. Because of its imperfection, it is rarer, more exclusive and more exotic.

The Japanese have a concept/culture of "Kintsukuroi" (or "Kintsugi"), in which broken bowls are restored with gold, to make a finished product that is considered more beautiful than the original. The greater beauty is felt to come partly from the gold itself and partly from the visible marks of the bowl's "history". I like this idea of "treasuring your exceptions" and of treasuring your eccentricities, imperfections and "dings": all very uplifting, really, for a grey morning in February.